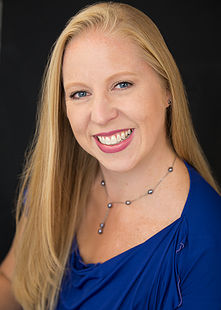 Bookkeeper and QuickBooks expert Anna Elisa Baker allows her clients to focus on their business while she tackles the books. As the founder of GruntWorks, Inc., she is ready to take on the tedious, annoying work you’ve been avoiding. She knows that when it comes to bookkeeping, people often don’t know where to start. They either don’t have the capacity or the desire—they got into business to live out their passion, which is almost never bookkeeping. Whether it’s frustrating and time-consuming, or intimidating and scary, Anna Elisa is happy to jump into the fray and make life a little easier.

As the daughter of an accountant, Anna Elisa has been working with numbers all her life. As soon as she could spell well enough to file properly and was tall enough to press Go on the Xerox machine (the one that took up an entire room!), she began to contribute to the family business. By 8 years old, she could fix the copier behemoth. By high school, she was fully integrated into the business and could do her job with a blindfold on. She even used the very first version of Quickbooks™ developed (let’s not talk about what year that was). For quite a while, though, she rebelled against accounting as a career. As she pursued different paths, bookkeeping was often how she paid the bills, and she eventually created her own bookkeeping company for tax purposes. After more than a decade of fighting it, she has happily returned to school to pursue education in the field, because it turns out she kind of loves it, and also she’s really good at it ☺

A Good Bookkeeper Is Good for Your Health

These days, she’s finally put a finger on what she loves about bookkeeping, and it’s not crunching the numbers, exactly. For her whole life, she watched people love what they do, and wanted that kind of reality. Who loves bookkeeping? “I’m good at it, I understand it, but I don’t love it,” she’d told her dad. What she does love is making a difference for people and putting them at ease. Her clients often walk through the door carrying a lot of stress—you can see it in their bodies, in their neck, in the way they’re breathing. During the initial consultation, she can watch them slowly decompress until eventually they exhale. Visibly. For Anna Elisa, that’s the magic—that release, that de-stressing, will free them up to take their business to the next level! So it turns out she loves bookkeeping after all, and she’s currently in school at Texas State University, all these years later, pursuing education in the field.

Anna Elisa offices at Orange Coworking and has a fantastic team around her. She loves the everyday moments of doing business with the GruntWorks team. Everybody learns and everybody grows, and that makes for a very worthwhile journey. As a company, they focus their time and attention on each business’s specific bookkeeping and clerical needs, recognizing that each and every business has its own unique character. Their close attention to detail, open communication, and dedication allow her to create a bookkeeping program that is catered to the needs of each client.

Even though Anna Elisa has come to love bookkeeping, her most important role is being a mom. She and her husband Jason have two girls who are the shaping force of their life. She loves that she gets to role model for them that you can go back to school and even figure out who you are later in life. And since both parents own their own businesses, there will be plenty of opportunities to contribute when they’re ready. She’s looking forward to following in her family’s footprints by empowering and equipping them for business, so that they can take their lives into their own hands and create their own paths. Anna Elisa also merges these two roles as she helps to lead Austin’s the B.O.M.B. (Business Owning Mom’s Brigade). She knows first-hand that running a business and a family is a combination that presents some unique challenges, so she enjoys creating spaces where moms can be real about sleep deprivation and budget shortages, meal planning and financial planning.

Want to talk to Anna Elisa?